CRISPR (pronounced “crisper”) is an acronym for ‘Clustered Regularly Interspaced Short Palindromic Repeats’ and is one of the major breakthroughs in modern molecular biology. This week QBRI experts explain how this bacterial immune system can be used to treat and diagnose COVID-19 in humans.

The recently discovered gene-manipulating CRISPR technology has been hailed for its superior ability to edit genes. CRISPR is actually a natural virus killer, first discovered in some types of bacteria that protect themselves from viral infection by cutting viral DNA into pieces using ‘molecular scissors’ called the CRISPR/Cas protein.

Ribonucleic acid (RNA) is a polymeric molecule essential in various biological roles in coding, decoding, regulation and expression of genes, and Cas is able to find its target by using “guide RNA” which directs it towards regions carrying similar sequences. Researchers have since changed the sequence of the guide RNA to perform gene-editing in multiple organisms (animals, plants, humans, bacteria, and viruses) for several applications. 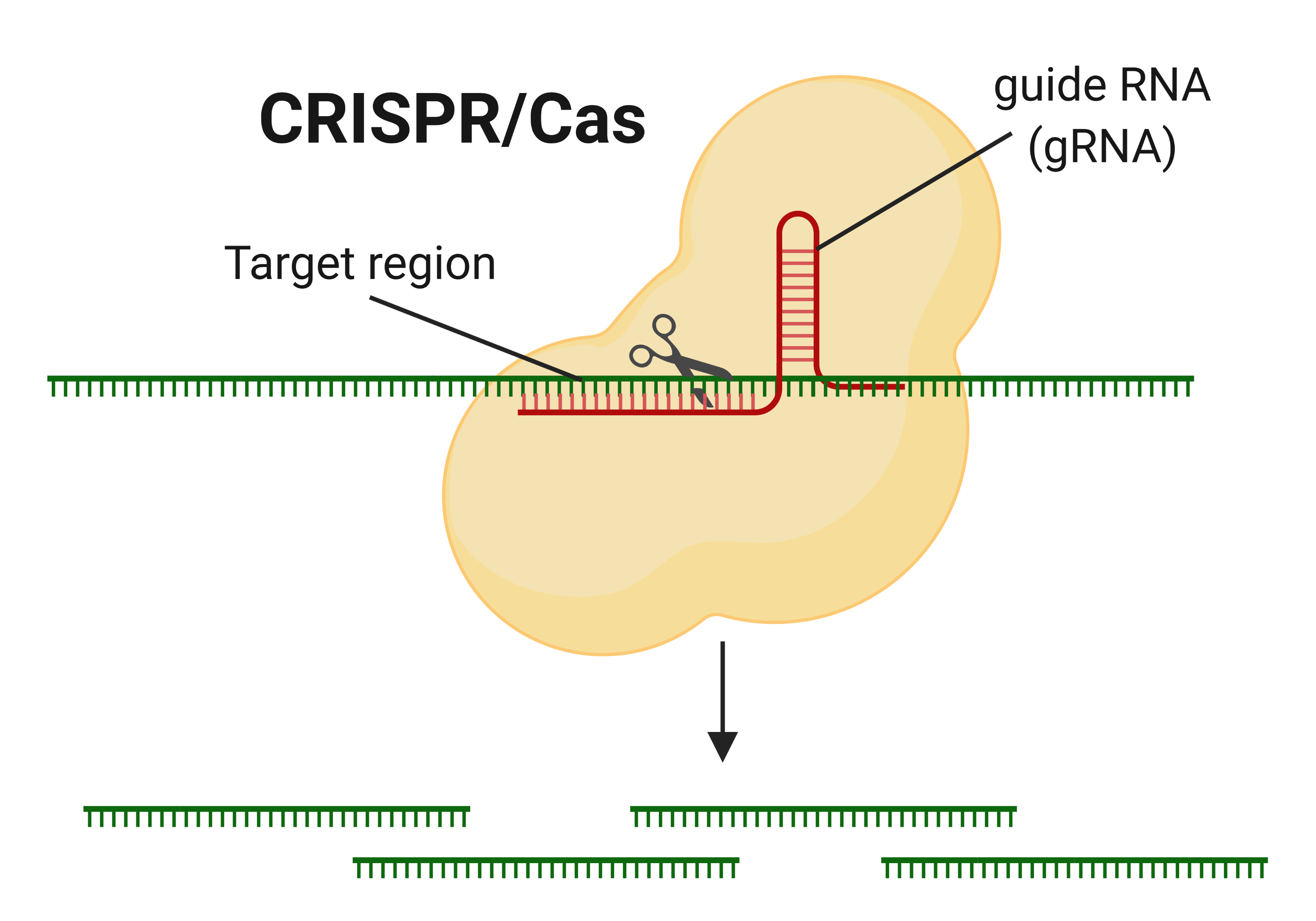 The world still awaits a vaccine to fight COVID-19 and scientists predict that it will take at least 12 to 18 months to develop an effective one. To date, none of the currently repurposed drugs have been convincingly effective against COVID-19.

Remdisivir, a drug which failed to treat Ebola, showed promise with patients in a Washington, USA study (1), but it is too early to forecast its efficacy in patients infected with evolved strains of the virus. The SARS-CoV-2 coronavirus, like any virus, is continuously mutating, making it more likely to become resistant to antiviral drugs.

In innovative efforts, researchers are now finding ways to treat COVID-19 using CRISPR, which may be more effective than traditional drugs and vaccines. Most ongoing vaccine trials rely on ‘training’ our immune system by exposing it to fragments of the coronavirus (such as the spike or membrane proteins).

Since the coronavirus is evolving, mutated strains of it may acquire new features and hence, be able to escape our immune response. To better understand how CRISPR can eliminate the SARS-CoV-2, let’s first look at how it infects lung cells.

SARS-CoV-2 uses its ‘spike’ proteins to land on receptors found on the lung cell surface and enters the cell to release viral RNA - the genetic code of the coronavirus. This code contains all the information needed for its replication. The virus uses the lung cell machinery, called the ribosome, to read and translate its code.

The ribosome reads the “ORF1ab” gene of the coronavirus and produces RdRp, the only protein which can read the rest of the viral RNA code to make new virus components (by a process called transcription and translation) and to make new copies of itself (replication). Now it is easy to see how important the viral RNA is to the survival and replication of coronavirus in our cells, and destroying it could restrain the virus. 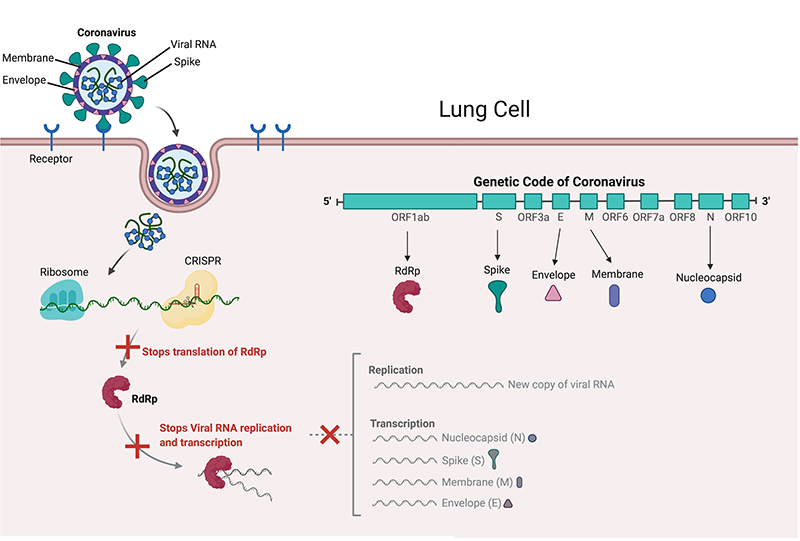 The same concept can be extended to target other genes like the M or E genes which produce the SARS-CoV-2 membrane and envelope. Considering these are common targets for antiviral drugs (Remdisivir works by disabling RdRp), CRISPR offers an advantage by being able to destroy multiple targets at the same time, making it even harder for the coronavirus to escape.

As a word of caution, these studies only provide a proof of concept strategy and still have a long way to go. Scientists have not yet developed a system to deliver CRISPR into patients’ lung cells. Dr. Pandolfi’s team showed that CRISPR can be packaged into empty viral particles (AAV carriers) in a “virus against virus” approach (2).

The AAV carriers enter the cells in the same way the coronavirus does and release CRISPR to find and destroy viral RNA. Dr. Stanley Qi’s team plans to use carriers made up of lipids or peptides for CRISPR packaging (3). These carriers can then be given to patients through a nebulizer system or nasal sprays as an antiviral treatment. Such systems still have to be tested in animals for safety and efficacy, and in patients to adjust dosage parameters, which will probably take years. Although we may not be seeing CRISPR fighting COVID-19, it may very well be ready when the next virus arrives. 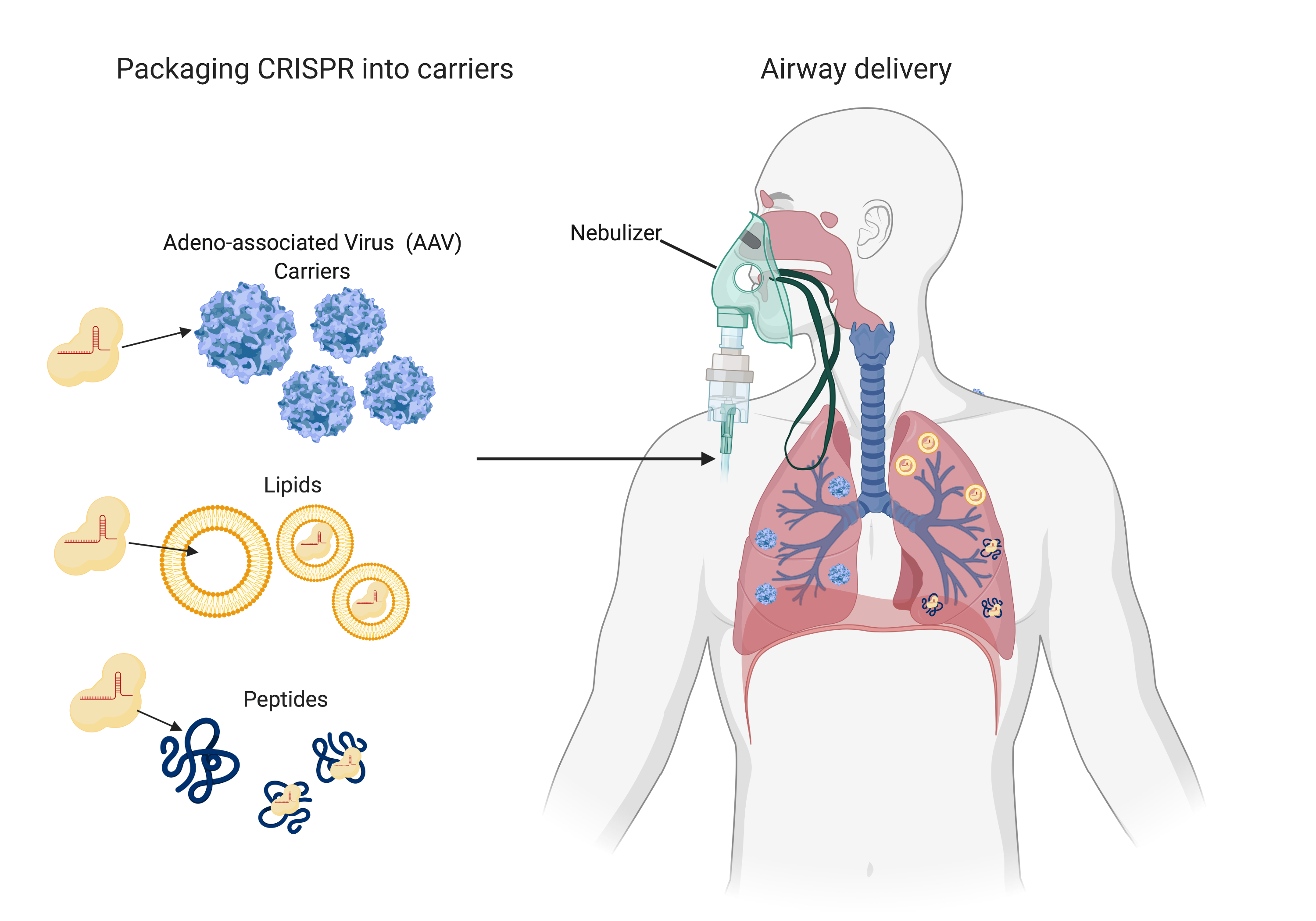 The CRISPR-Cas system can be applied not just for genome editing and treatment, but also for disease diagnosis. In 2018, the pioneers in gene editing published two parallel papers describing CRISPR-based platforms to quickly detect viruses or tumor DNA.

The first approach, “SHERLOCK” (Specific High-sensitivity Enzymatic Reporter unLOCKing), was developed by the Zhang Lab at the Broad Institute in the US (4). After SARS-CoV-2 genome characterization, they adapted SHERLOCK to detect COVID-19 (5).

Briefly, the guide RNA (gRNA), designed to detect either the virus Orf1ab or S gene, binds to its target sequence and activates the Cas13a enzyme, which degrades the RNA. Labeled RNA is included in the test to generate a detectable signal, indicating that the Cas enzyme is active and the sample is ‘positive’. At the moment, this method is used for research purposes only.

The second technology, “DETECTR” (DNA Endonuclease Targeted CRISPR Trans Reporter), was initially developed by the Doudna Lab, UC Berkeley to detect DNA (6). It has recently been adapted to detect SARS-CoV-2 (7, 8). The enzyme used is Cas12a and gRNAs are designed to either detect gene N or gene E. Detection is visualized similarly to SHERLOCK (7, 8). This method has been validated in patient samples, although it has not yet been approved by the FDA.

The major advantage of CRISPR-based SARS-CoV-2 diagnosis lies in its ease and rapidity of use in most laboratories. However, its detection sensitivity is lower compared to the gold standard qRT-PCR (real-time reverse transcription polymerase chain reaction).

Other researchers are using similar, but improved, strategies to overcome this limitation but studies are still preliminary. For example, AIOD-CRISPR, All-In-One Dual CRISPR-Cas12a, is designed using two gRNAs to increase its specificity with all the steps conducted in a single tube (9), and CREST, Cas13-based, Rugged, Equitable, Scalable Testing, is a cost-effective pipeline that combines the robustness of PCR with CRISPR-based detection (10). 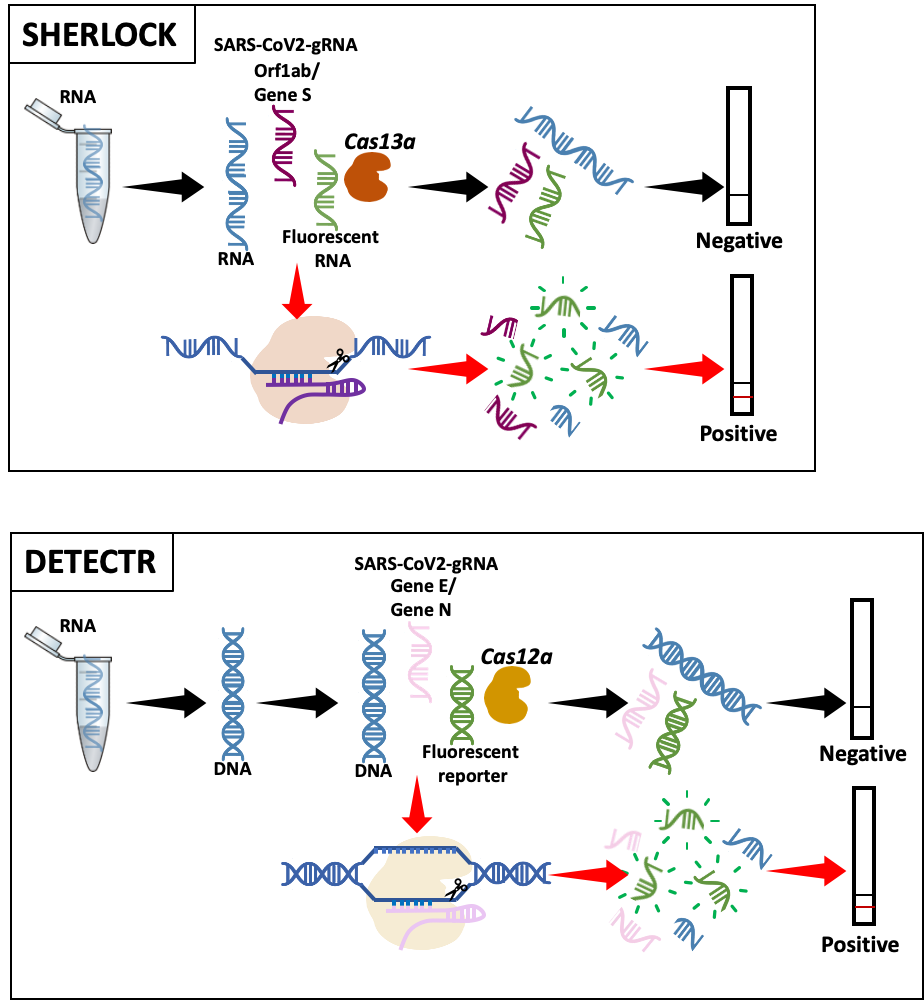 COVID-19: What Makes a Disease Communicable?

Despite outstanding progress in the treatment of various diseases, the global burden of communicable and non-communicable diseases continues to be heavy. This burden is a major concern for economies and healthcare industries worldwide.

‘Normal life’ as we have always known it has collapsed worldwide due to COVID-19, which is caused by SARS-CoV-2. This week QBRI experts discuss why a vaccine is the only hope for resuming normality and highlight recent progress in multipronged approaches to SARS-CoV-2 vaccine development.

COVID-19: What Makes a Disease Communicable?

‘Normal life’ as we have always known it has collapsed worldwide due to...