Breast Cancer - Awareness and Screening at a Younger Age is Key

Breast Cancer - Awareness and Screening at a Younger Age is Key

Globally, breast cancer affects one in eight women (1); thus most people in the world have been affected either directly or indirectly by witnessing loved ones fight this disease.

During October, the world becomes pink-er – the pink ribbon having become established as a universal symbol for breast cancer – with an annual campaign to spread knowledge about the impact of breast cancer and raise awareness for early detection, which could save many lives.

The global incidence rate of breast cancer has continued to increase for the past 20 years, with a similar rate of increase in the Middle East and North Africa (MENA) region (2). Within the MENA region, Qatar was ranked fourth according to the 2016 statistics, with an incidence rate of 39 cases per 100,000 women (2). Before considering mortality rates, it is very important to highlight that with early detection, the five-year survival rate of early-stage breast cancer has improved beyond 90% (Figure 1) (3). 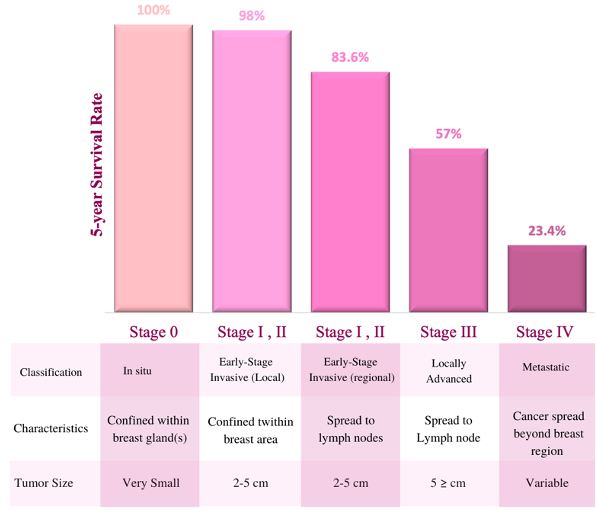 Survival rates drop drastically with more advanced cancer stages and therefore early detection and diagnosis is key. In the United States, 63% of all women with breast cancer were diagnosed at an early stage, yet only 47 % of women were between the ages of 15-39 years old, possibly because routine screening does not begin until age 40(4). Across all subtypes and stages of breast cancer, survival rates are comparatively lower for women below the age of 40 (2).

We dedicate the October 2021 edition of QBRI Insights to increasing breast cancer awareness and the importance of early screening, with the hope of providing reference and convincing information to take this initiative forward and encourage loved ones.

Breast cancer is diagnosed by three standard examination methods: clinical, radiological (mammogram, MRI and ultrasound) and immunohistopathological (5). breast cancer is a heterogeneous disease at the clinical and molecular levels and hence has been subtyped based on numerous classification criteria. The most commonly used classification (immunohistochemical) identifies four subtypes according to the expression or the lack of three proteins: Human Epidermal Growth Factor Receptor 2 (HER2), Progesterone Receptor (PR) and Estrogen Receptor (ER). Despite this, clinical tumor samples or biopsies from the same subtype can be heterogeneous, and therefore molecular profiling of tumors has become very important to further refine the type of tumor and assist in treatment decision-making.

The treatment of breast cancer continues to evolve with scientific advancements and is currently routinely dependent on several factors including tumor-node-metastasis staging, histologic grade, expression of hormone receptors (PR and ER), over-expression of HER2 and age.

More recently molecular profiling has been incorporated into the patients’ clinical care using technologies such as MammaPrint (6) and Oncotype DX (7), both of which are approved by the US Food & Drug Administration (FDA). These technologies are designed to assess the levels of certain genes within the tumor to give indications of the likelihood of recurrence within 10 years of diagnosis in patients with early-stage breast cancer and thus guide physicians in treatment decision-making.

The Burden of Breast Cancer in Young Women

One of the most aggressive types of breast cancer, which accounts for 15-20% of all cases, is called Triple Negative Breast Cancer (TNBC) (8). TNBC presents at a younger age, is more aggressive with shorter overall survival, more likely to metastasize (spread to distant areas in the body) and is associated with a mortality rate as high as 40% within the first five years of diagnosis.

TNBCs lack the expression of hormone receptors (ER and PR) and the HER2 receptor and is thus unsusceptible to hormone therapy or HER2-targeted therapy. Compared to patients of older age, breast cancers in younger women are characterized with unfavorable features such as tumors of larger size, higher grade, increased lymph node positivity, and lower disease-free survival rates.

Genetic studies revealed that breast cancer in younger women has more than 350 gene sets with significantly altered levels compared to older patients (9). Overall, 5-10 % of breast cancer cases are hereditary, mainly related to mutations in the BRCA1 and BRCA2 genes, nevertheless, BRCA gene mutations have been associated with more than 20% of TNBC patients with no family history of breast or ovarian cancers and diagnosed at a young age (below 50).

A study in young Arab TNBC patients (below 50) revealed that 18.3 % of patients were positive for the BRCA1 mutation and 7 % for the BRCA2 mutation (10). A study conducted in Qatar showed that patients carrying BRAC1/2 mutations developed more aggressive breast cancer subtypes at an earlier age than patients who do not harbor the mutations (median age 34 versus 41), and 56.3 % of BRCA1/2 mutations carriers were of the TNBC subtype (11). These studies and others indicate that younger women carrying the BRCA mutation have significantly higher risk of developing more aggressive breast cancer and early detection could contribute to an improved rate of survival.

Several advancements have been made in developing therapies to treat TNBC. Using molecular profiling, experimental studies and computational tools, researchers continue trying to identify biomarkers to facilitate treatment and to understand the complexity of the environment around the tumor (tumor microenvironment) to have a better insight of what makes the tumor unlikely to respond to therapies. 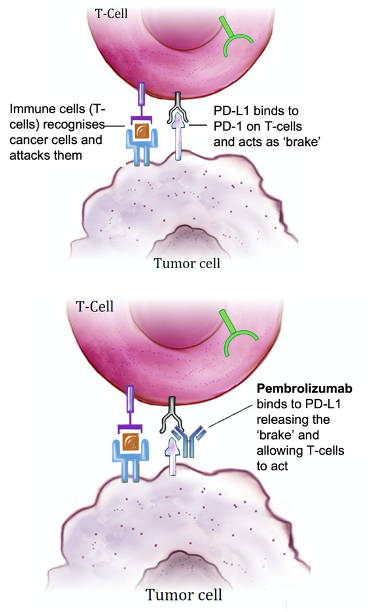 TNBC shows association with higher levels of genes that encourage the spread of cancer to other parts of the body (metastasis-promoting genes) and lower levels of metastasis-inhibiting genes (12). Furthermore, TNBC harbors characteristics that suppresses detection by the immune system (tumor immunosuppression) such as mutations in the TP-53 gene and the polarization of immune cells to ‘sleep mode’ such that they do not respond to the threat posed by the tumor cells.

To ‘wake-up’ these immune cells, researchers have developed several antibodies to target molecules which inhibit the immune response such as T-lymphocyte Antigen- 4 (CTLA-4) and programmed death ligand-1 (PD-L1)- a treatment modality known as immunotherapy (Figure 2).

With several clinical trials assessing the potential of these antibodies, atezolizumab (Tecentriq) was approved by the FDA in March 2019 for the treatment of advanced TNBCs whose tumors express the PD-L1 protein (13). Not all patients with tumors expressing PD-L1 respond to anti-PD-L1 immunotherapy and thus other biomarkers have been discovered and approved to identify patients who will benefit from this therapy.

One of the leading biomarkers for predicting patients’ eligibility for immunotherapy is tumor mutational burden (TMB), which is the total number of somatic (non-inherited) mutations within the tumor genome. In June 2020, the FDA approved the use of the anti-PD-LI antibody pembrolizumab (Keytruda) for the treatment of solid tumors in adults and children including TNBC whose tumors show TMB above a certain cut off value (14).

In June this year, pembrolizumab was also approved as a first line treatment to treat high-risk, early-stage TNBC in combination with chemotherapy. In cases with relapsed metastatic TNBC, Trodelvy (sacituzumab govitecan-hziy) was recently granted accelerated approval by the FDA.

Trodelvy is an antibody directed against the Trop-2 protein that helps the cancer grow, divide, and spread and is conjugated with a topoisomerase inhibitor drug, which is a chemical compound that is toxic to cancer cells. To complement these advances, further refinement and standardization of tumor molecular profiling will allow more accurate prediction of patients’ eligibility to certain therapies and facilitate the implementation of personalized and precision medicine.

QBRI’s Translational Cancer and Immunity Centre (TCIC) focuses on two areas of cancer research: biomarker discovery and mechanisms of resistance, and cancer immunology and immunotherapy. TCIC researchers are involved in identifying biomarkers to guide the diagnosis of breast cancer, the development of new discoveries and to predict patients’ outcome to certain therapies.

QBRI researchers also focus on understanding the tumor microenvironment to gain an insight on how cancer cells overcome detection and destruction by the patient’s immune system. This understanding is important to improve the response to current immunotherapies and pave the way for new targets for the treatment of breast cancer. TCIC researchers are also involved in collaborative and interdisciplinary research projects, one of which is the identification of causative mutations other than BRCA1/2 in families with breast cancer in the MENA region. The ultimate aim is to understand the demographic predisposition of the Arab population to breast cancer, to guide personalized treatment decision-making, and improve patients’ survival chances.