Ties Between Qatar and Turkey are as Strong as Ever | HBKU

Ties Between Qatar and Turkey are as Strong as Ever

Walking through Doha, one cannot help but notice the increasing presence of Turkish nationals and businesses in the city. Turkey and Qatar’s relationship dates to the late 19th century when the Ottoman Empire considered adding the Eastern Arabian Peninsula, including modern-day Qatar, into its vast empire. After a few decades of tension, conflict, and sometimes peace and cooperation, the Turks abandoned their claims on Qatar in July 1913.

Given the small size of Qatar’s population and economy, and the sub-par economic performance of Turkey towards the end of the 20th century, economic relations between Turkey and Qatar were minimal until the 21st century. With the onset of the 21st century, Qatar emerged as a major player in the global liquified natural gas (LNG) market, while Turkey was able to address persistent hyperinflation and weak institutions that had crippled its economy for most of the second half of the 20th century.

The emerging correlation between the economic growth and stability of the two nations provided new opportunities for trade and economic cooperation. In 2000, trade volume between the two countries stood at a mere $38 million. By 2016, this figure had increased by more than 27 times and was upwards of $818 million.

By 2019, and as a direct consequence of the 2017 Saudi-led blockade of Qatar, trade volume between Turkey and Qatar jumped to about $2.2 billion (Table 1). This rapid increase has not been the same on both sides. As shown in Table 1, the past decade has witnessed Turkish exports to Qatar enjoying a continuous rise, experiencing a whopping 587% growth rate between 2011 and 2019, while the volume of Qatar’s exports to Turkey have seen ups and downs from one year to another, reflecting the volatile nature of the LNG prices in the global markets. Nevertheless, Qatar’s exports to Turkey have experienced an overall increase of about 25% in the same period (Table 1). 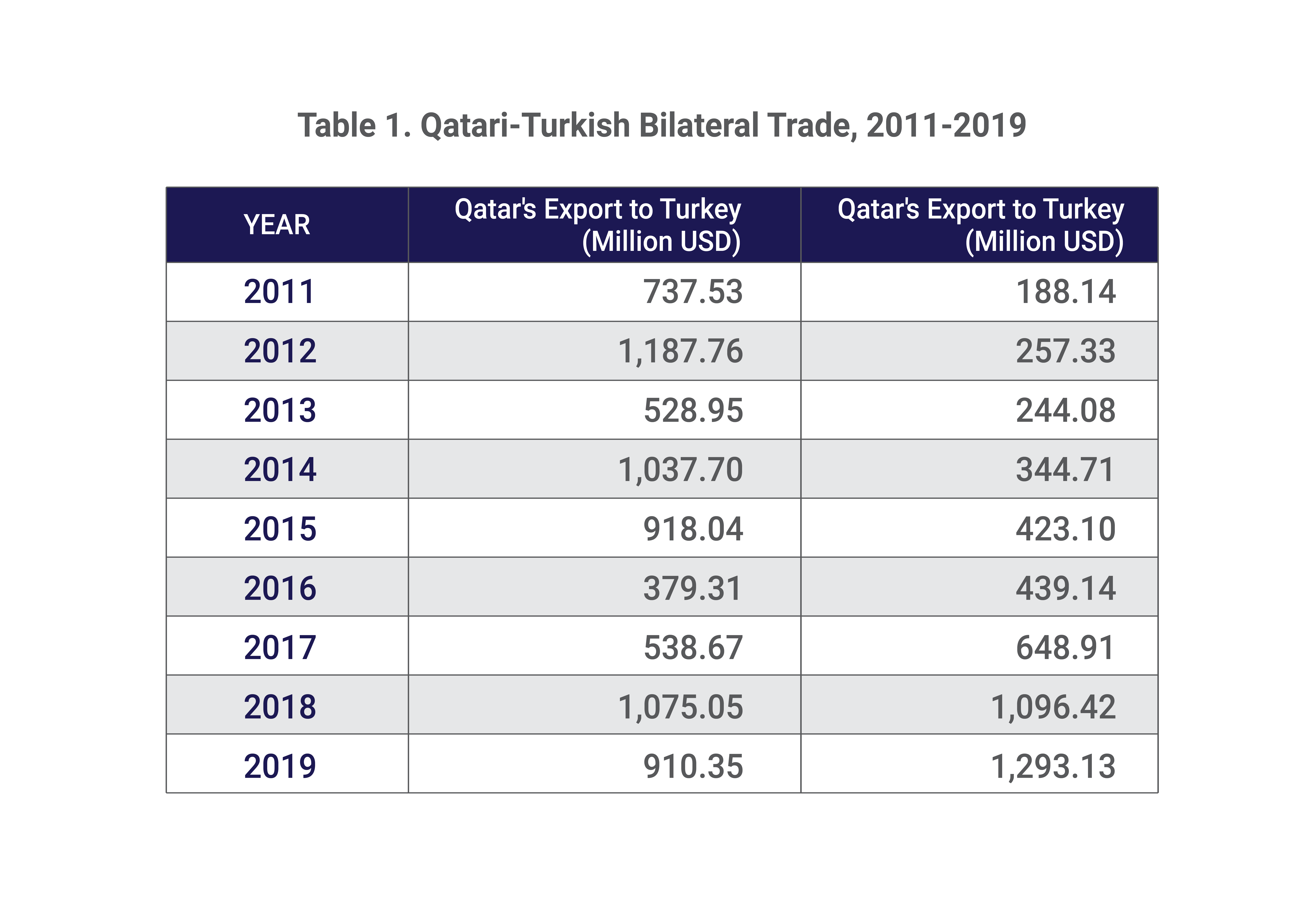 Looking at this from a different perspective, not only have the trade volumes between the two countries been on the rise, but the two economies are also becoming more important trade partners for each other. This is showcased by the fact that Qatari-Turkish bilateral trade as a share of their total trade has been increasing continuously between 2011 and 2019 (Figure 1). 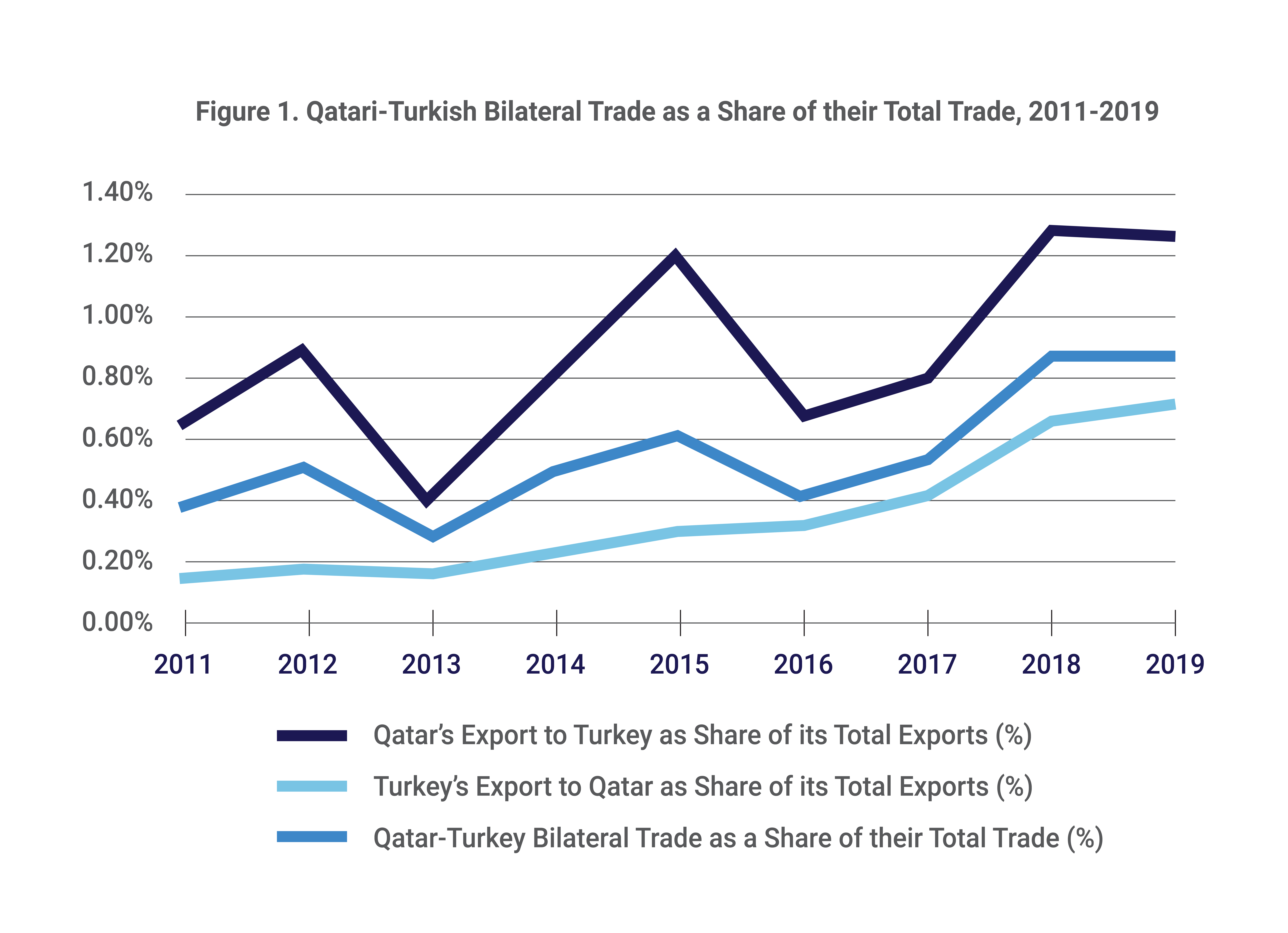 The increasing economic relationship between the two countries has been solidified with increasing military corporations that started in 2002. Recent agreements in 2015 paved the path for the establishment of a Turkish military base in Qatar and vice versa. With the onset of the blockade, the Turkish military presence in Qatar increased to around 3,000 soldiers and military personnel.

It is important to realize that, while the increasing military cooperation between the two countries was a consequence of increasing economic ties between Doha and Ankara, the relationships on both fronts were kicked into new gears after the blockade. On cultural fronts too, Turkey’s presence in Qatar has been on the rise. As of now, two schools in Doha operate according to the Turkish curriculum, catering to the increasing population of Turks residing and working in Doha.

The recent steps taken towards the normalization of relationships between Qatar and Saudi Arabia have raised questions and concerns about the nature of the relationship between Qatar and Turkey. Qatari officials have reassured that any normalization of relationships with Saudi Arabia is not going to impact their economic, political, and military ties with Turkey. The reason is clear. Qatari-Turkish economic and military ties have grown substantially in recent decades and the two countries agree on many political and security-related issues in the MENA and the Gulf regions. For example:

Finally, the historical memory of Qataris will never forget that after several of its neighbors sealed off their air, land, and sea borders to and from Qatar in Ramadan 2017, Turkey rushed in to support Qatar by exporting food supplies, particularly dairy, poultry, and fruit products through Iranian air and sea borders with Qatar.

The economic, security, and cultural ties of Qatar and Turkey are substantially stronger now than ever and any form of normalization between Qatar and Saudi Arabia and other blockading countries is not expected to lead to any drastic changes in this relationship. Confident of this fact, Turkey has welcomed the recent steps taken for ending the blockade of Qatar on the grounds that it will contribute to the stability, security, and prosperity of the Gulf and MENA regions.

The rapprochement between Qatar and Saudi Arabia, alongside the change in the U.S. administration which favors diplomacy and dialogue to coercion and conflict, and Qatar’s recent offer to re-establish talks between Iran and Arab Gulf states, have created new opportunities for stability and peace in the Gulf region that needs to be seized. Without doubt, Turkey will have an increasingly important role to play in this front.

*Dr. Amin Mohseni-Cheraghlou is an Assistant Professor of Islamic Finance and Economy at the College of Islamic Studies at Hamad Bin Khalifa University